NORTH SALT LAKE CITY, UTAH – Local environmental groups are celebrating a victory now that a medical waste incinerator in North Salt Lake belonging to Stericycle has been shut down. The group Utah Physicians for a Healthy Environment has been leading the charge to stop the plant from burning medical waste in Utah. The company has come under fire in recent years for its incinerator in North Salt Lake, which has been blamed for causing health problems in the surrounding community. 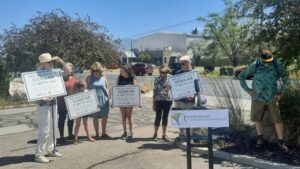 As a result of their efforts, Stericycle will now take its medical waste to burn near Reno, Nevada. This is a win for the environment and for public health, as incinerating medical waste can release harmful toxins into the air. The groups who fought to shut down the Stericycle plant should be commended for their efforts to protect the community. Hopefully, this will set a precedent for other communities who are fighting against medical waste incineration.

The reported move by Stericycle comes after nearly a decade of attempts from concerned citizens, community groups and even massive fines against the company to regulate its burning. In 2008, the state of Utah slapped Stericycle with a $2.5 million fine—at the time, the largest environmental fine in state history—following years of citizen complaints about noxious odors and increased rates of respiratory problems. The company was also ordered to spend $5 million on new scrubbers and monitoring equipment, and to pay for an independent review of its operations. At the time, then-Attorney General Mark Shurtleff said that Stericycle had “engaged in a pattern of deception and subterfuge” and that the company had “knowingly put the citizens of Utah at risk.”